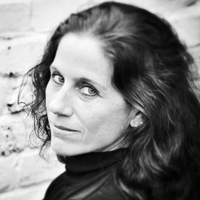 Monika is founding director of the Liverpool-based film/architecture production and post-production company CineTecture Ltd and holds a part-time teaching position at the University of Liverpool. Monika has a large portfolio of academic, commercial, and art-based moving image productions. In her artistic Oeuvre, her work emphasises the creative use of the ‘body in motion’ as well as the use of ‘space’ and ‘screen space’ as a narrative expressive element. In terms of CAVA research, her specialty is the productions of films, digital animations and motion graphics that emphasise and illustrate complex themes in an understandable and accessible way to allow for greater impact.

Her artistic work regularly features at major international exhibitions, such as the Venice Biennale in Architecture (2000) and the German IBA Exhibition (International Building Exhibition 2004, 2005), The Beyond Media Festival (Florence, 2009), the Filmforum (Udine, 2009), The Architecture & Design Festival (New York, 2010; Chicago 2011), The Film Casino (Vienna, 2011), and in a curated show in the Fondazione Maxxi (Rome, 2011). Monika won the prestigious TVe Global Sustainibility Film Award in 2013.